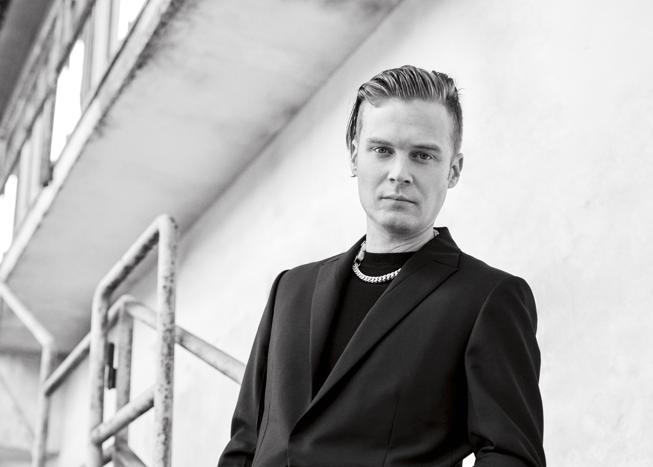 Of all the designers moving from regular Fashion Week to the haute couture, the switch by Acne Studios to show its women’s collection might be the most convincing and believable. That’s not intended as criticism of the others who’ve decamped to this slot on the fashion calendar, and it’s certainly not because Acne’s Jonny Johansson fancies himself ready to take on the daunting, double-trouble challenge of le tailleur and le flou, the twin pillars of the couture. As he put it in a pre-show backstage chat, “We’re not trying to get the limelight of the couture, or to disturb it in any way.” Johansson explained further: “It’s quite a bold decision from a business perspective, but from a life perspective, it’s an important choice. I love fashion, but I can’t keep up with these long, long, long seasons. We’ve gone backwards; now we do one collection that contains a wardrobe, that we always do obviously, with some spice, and that’s it.” So now he shows his men’s in Paris as usual, and his women’s a matter of days, rather than many weeks, later. If that sense of life choice explicitly influenced his decision, a lifting of the eyes away from the grindstone for just a minute to think about ways to deal with the industry’s ceaseless desire to always be showing you’re doing something, anything, then the sense of re-prioritizing also factored into the collection itself. Johansson has watched as friends and colleagues have chosen to move away from urban environments to live in the countryside. “And they come back looking amazing, great skin, relaxed,” he said, laughing. It’s a zeitgeist-y, don’t-we-all-feel-it-right-now yearning that he’s caught here, much in the same way as Acne’s recent ad campaign starring Atlanta couple Kordale Lewis and Kaleb Anthony with their ridiculously adorable kids celebrated what family means in the 21st century. This then was the Swedish label’s ode to the rural idyll, to reconnecting to a quieter, less incessant rhythm of life, and what resulted felt romantic, comforting, and rich in spirit, and with a cool whiff of the early ’90s; not grunge, but more the downbeat beauty of Corinne Day shooting Cecilia Chancellor in a field. Wind-beating, weathered trenchcoats snapped over crumpled silken polka-dot print trousers or cuffed leather crop pants. There were terrific bias-cut, pintucked, floral-sprigged dresses that looked like they’d been left out to dry in the wind and the sun, some partnered with metallic and ever-so-slightly kitschy floral shirts, haphazardly buttoned to trail from the shoulders. And there were plenty of the great coats that Acne Studios has proven itself to be so adept at these past few seasons, too; the label is based in light- and heat-challenged Sweden, so practice has clearly made perfect here. Next Fall’s standouts: the floor-length fake fur and wool-paneled looks, or a leaf-strewn print on an oversize blanket-wool piece tied at the waist with an oversize shoestring. Do try this styling trick at home. Or in the country. You know, either will work. -Review by Vogue Runway 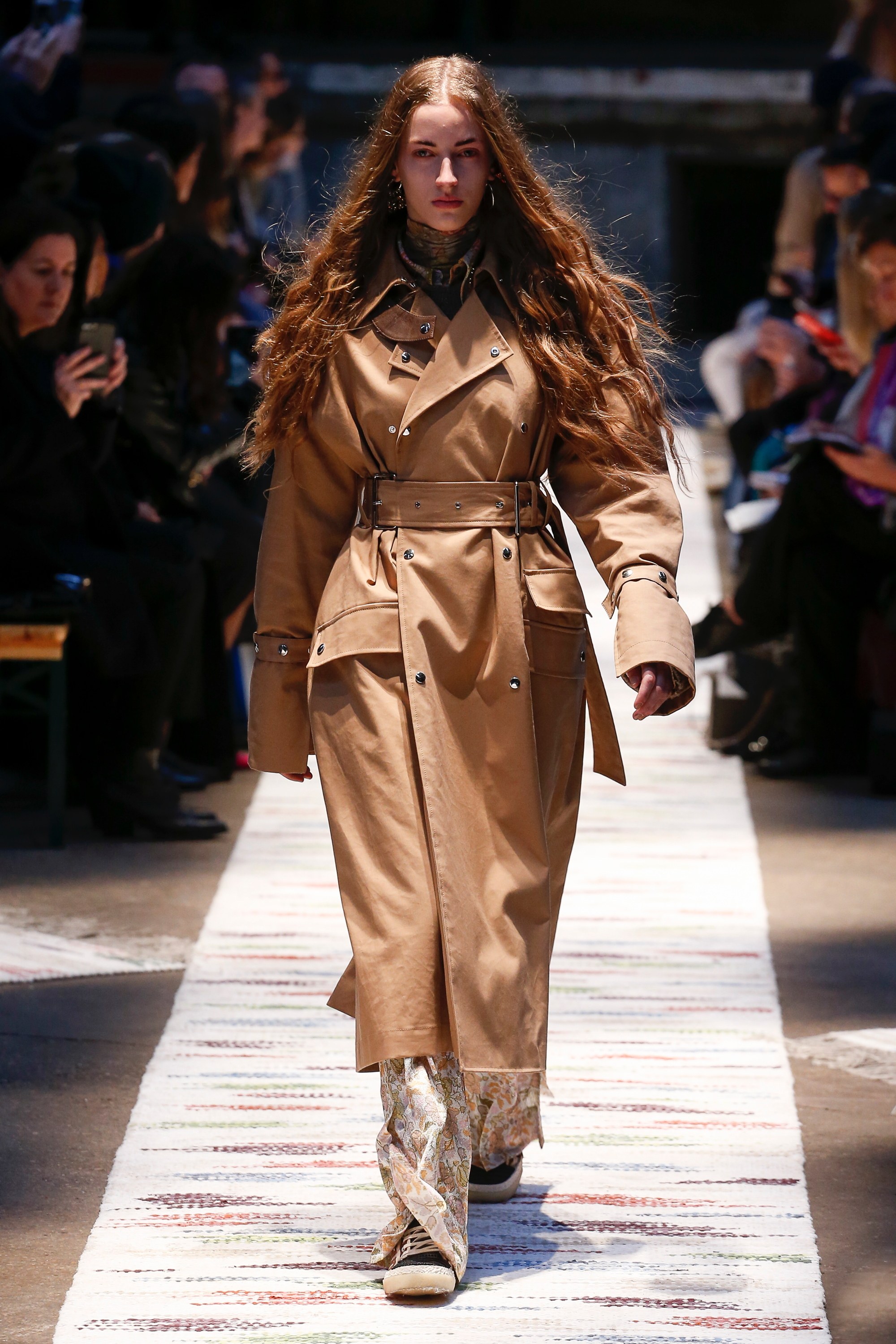 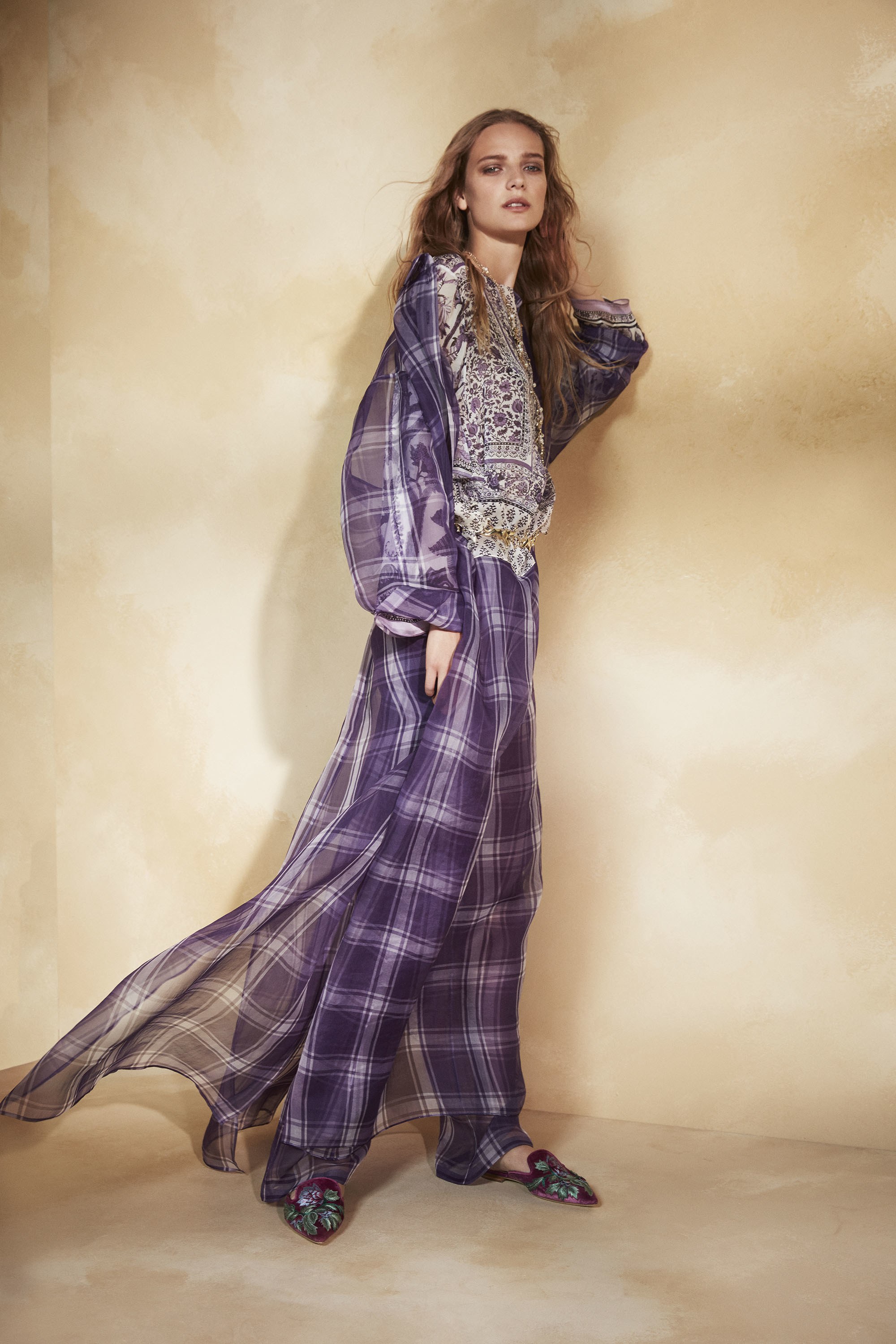 The success of Alberta Ferretti‘s Rainbow Week sweaters prompted a new capsule idea for Resort. Ferretti is producing a small silk slip dress offering and selling grunge-ified slouchy mohair sweaters to go with them. If that sounds like an unlikely pairing for this Italian designer, who has historically been known for floaty, filmy evening dresses, consider those hit-making days-of-the-week cashmeres, and consider again that all brands must evolve and skew younger to survive. A subtle rejiggering is happening chez Ferretti. She hasn’t said ciao entirely to her goddess-y frocks, and it’s not as if her target audience is suddenly teenagers. But she is responding to a world that seems to be getting more casual by the instant. Hence those undone slips and knits, and hence, elsewhere, pieces such as easy-to-wear paper bag–waist pants, a drawstring neckline top, and breezy chemisier dresses, not to mention the I-woke-up-like-this feeling of her mix-and-match florals and pajama plaids. Ferretti looked to India for Resort, and it inspired the collection’s prints, jacquards, and embroideries. The floral-plaid combo appeared youngest and freshest. For her established clients, there’s a lush landscape print, most interestingly on a waterproof technical silk trench. - Review by Vogue Runway

Amidst a swollen sea of white roses, anthuriums, and artificial candles, Mike Amiri made his official Paris debut today. “You don’t want to be ridiculous but you do want to evoke a bit of emotion,” he said, sleeker and more gregarious than when we met for a showroom visit last season. “I wanted people to walk in and have the reaction, ‘I wasn’t expecting him to go this far.’ I wanted to give the collection its best chance.” Or else, take a chance, for while his music video–esque vigil made for a curious opening salvo, there’s no doubt these rock star, streetwear looks were designed to kick up his cred several notches. To do so, he considered details that attested to workmanship and top-shelf pricing: the hand-painted python, the red velvet tuxedo strung with chains, the shawl collar in studded double-faced leather. Other details attested to all-day attitude: bandanas and chains wrapped around suede boots, blanket coats, surf-inspired separates, and sparkle-dusted denim. And let’s not forget the detail attesting to cult-film vampires: A vintage T-shirt featuring Kiefer Sutherland from The Lost Boys, utterly defaced with strass. For a label aiming to feed the fashion whims of athletes, and sell-through imperatives of retailers, these glam-grunge details will hit all kinds of sweet spots. Still, despite receiving coveted New York Times real estate right before fashion week, Amiri remains a question mark. The made-in-Los Angeles, hands-on manufacturing is admirable; the repackaging of Hedi Slimane’s Saint Laurent less so. The look might translate from Venice Beach to the Bowery—and perhaps beyond to the Middle East and Asia. Here in Paris, however, while legs may be skinny enough for his hand-distressed jeans, few guys would dare to do glitter (likewise the women, for that matter, in light of the corresponding capsule). But let’s ride this wave and see where Amiri takes us. “It becomes more real as you get more traction and you get more courage to be audacious about your dreams,” he said, with just the right amount of wide-eyed ambition. “Just seeing this, I’m almost thinking braver and bigger.” - Review by Vogue Runway 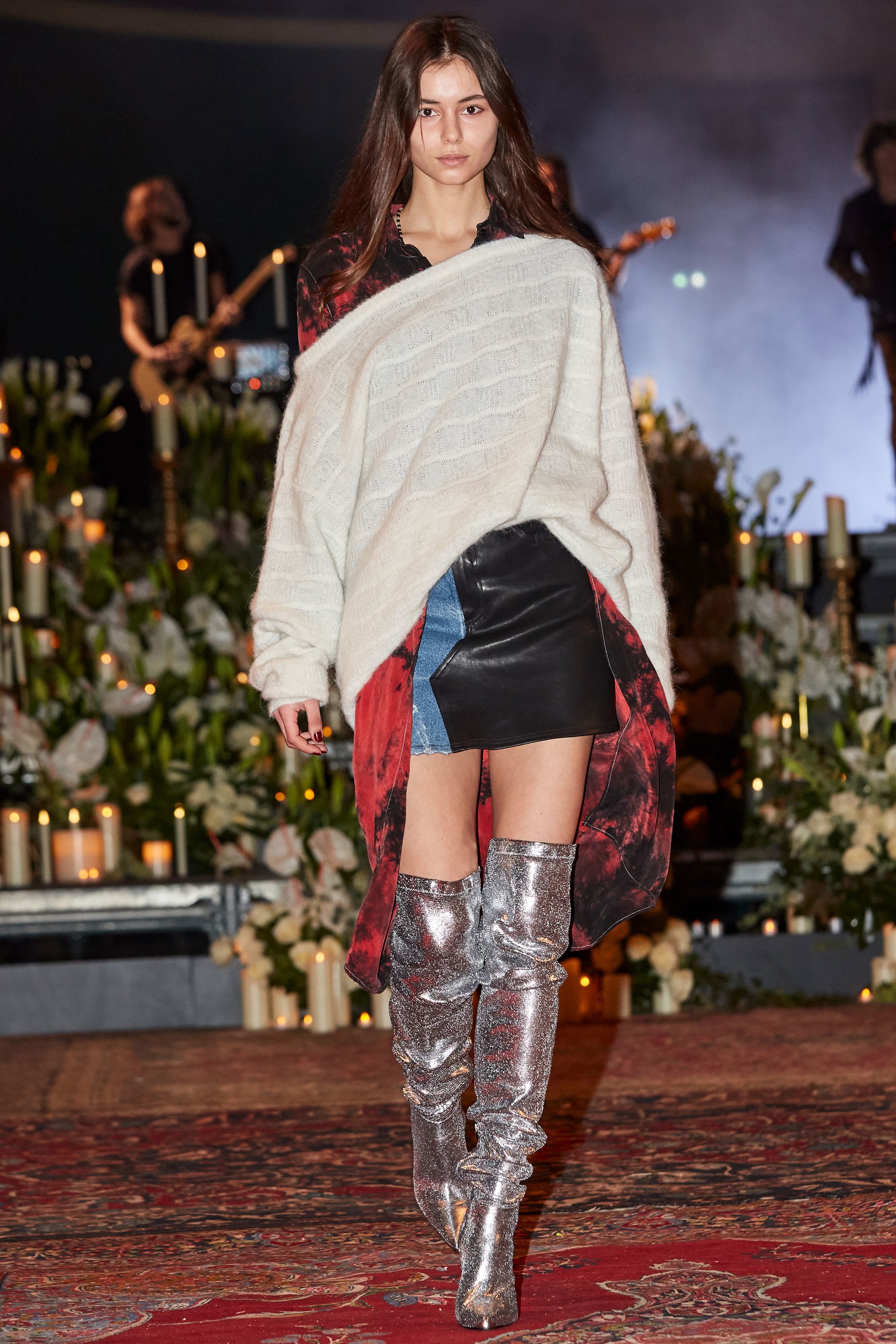